When I get email, it has a tendency to sit in my inbox until I’m done with it. The junk gets deleted, unread. Other junk gets deleted, read. A few things might get “filed” in case I ever want to look at them again. And the rest sits and waits until I have time to deal with it appropriately.

Some things have been sitting for quite some time. For example, Jody Erickson emailed me last October about her hands-on sacrament preparation activities. I saw her table at the IHM Conference, and her products are very nice. I’ve also seen her book, Montessori on a Shoestring, and I wish I had had that about 5 or 6 years ago.

Back in June, I received an email telling me about Direct from Lourdes. If you want Lourdes water or a statue of St. Bernadette or anything else related to the apparitions there, including general (online and free) information about what happened, this is the place.

And also more than a month ago, I found out about Logos Bible Software. I definitely prefer a bound paper book to anything electronic (call me old-fashioned), but I do see the high value in having digital versions of texts. If you are studying theology, routinely writing articles or papers about certain topics or simply like to be able to find that passage or quote to bolster an after-dinner discussion with an argumentative spouse (not speaking from experience here at all), being able to search with a few key strokes and find your section within seconds as well as being able to cut and paste passages for your articles is convenient indeed. Logos Bible Software isn’t just the Bible. Their Catholic products include works of Augustine, Aquinas, Chesterton and others.

And lastly, I blogged about going to Williamsburg and mentioned that they have Homeschool days in the fall. I got another email telling me that the dates for this are September 12 – 27 (wow, two full weeks). If you pay in advance by 8/31, it is a mere $5.50 per ticket for one day with walk-in prices of $6.50. Two days are $8 in advance and $9 for walk-ins. Children 5 and under are free. The phone number given was 800-228-8878. Regular admission for an adult is $36, so this is quite a savings. I’m not feeling brave enough to do this without Bill, so it will have to be another time for us. But if you go, I highly recommend the Jamestown and Yorktown visitor’s centers as well.

Last fall, a friend of mine donated a kidney to a total stranger. Recently, she sent me this story about a man from her parish who had volunteered to donate for that same woman, but he wasn’t a match. He went on to donate to another stranger, and his generosity led to a chain-reaction of donations totalling EIGHT donated kidneys. It’s a neat story.

I happened to be up at 2 am, so I checked my email to see if there was a note from Bill. It is, after all, mid-morning by that time in Afghanistan.

I went back to bed, sulking. Why hasn’t he written? I mused in a pathetic manner.

Perhaps, I retorted to myself, because he knows it’s 2 am here, and that you should be sleeping and not checking email.

And when I woke up later, at a decent hour, there was, of course, a love note.

And thus my morning is glorious.

On Thursday, I had two families over. My friend, Rachel, and her family were moving to Kansas the next day, so this was a goodbye party.

Rachel and I met in 2006, and the following summer we sadly moved away (to Kansas). Being able to see them again was the number one reason I was happy to return to this area in 2008. Now it’s their turn to move.
As they left our house Thursday night, there was much wailing. This is the thing I hate most about the Army life. But as I reminded us all, the Army brought us together, too.
I hold it true, whate’er befall;
I feel it, when I sorrow most;
‘Tis better to have loved and lost
Than never to have loved at all.
– Tennyson
It will be easier on me, since Rachel and I can email and blog to stay in touch. The kids will have to write letters for now, but maybe in a few years, they’ll be Facebooking. I suggested to Billy that they all go to West Point together. It has the wheels in his mind churning. 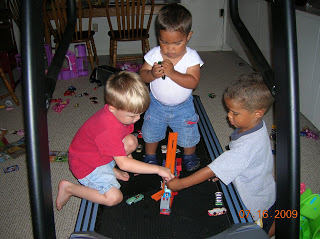 The treadmill makes an excellent blacktop for car racing.

Taking a break from Jedi training.

There are times Jenny is a huge help.

Dirt is all little boys really need.
Farewell, my friend. You will have a great time in Kansas. We shall see each other again, I’m sure. Let me know when you pick a place to retire, and I’ll buy the house next door.
by michellereitemeyer 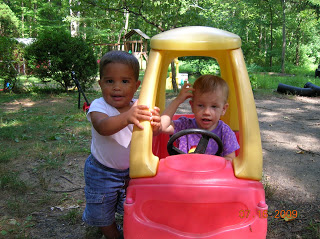 Him: This is some car. I like this car. I could go places in this car.
Her: Uh, Mom, I could use some help.

Him: Maybe if I try the “Look over there” distraction technique, she won’t notice if I climb in with her.
Her: What the…?

Him: Okay, here’s the deal. I want this car. You’re just going to have to get out.

Him: Okay, you asked for it.
Her: The Force has failed me.
(Note to Joseph’s Mom: the last picture was taken 5 minutes later after she got out all on her own. It was his turn fair and square.)
by michellereitemeyer

Katie: Mommy, how old do you have to be to get a credit card?

Me: Old enough to have a job to pay for it.

Katie: Do YOU have a job?

My 2nd thought: No, I have a Sugar Daddy.

One day, when my kids are adults, I’m going to actually say some of these things I think. They may go into shock, since I’ll have spent 20 years or more blandly answering their questions. Maybe they’ll blog about their crazy old mom. They’ll claim mental degeneration, but we’ll know it’s just my true colors finally coming through.

Yesterday I tried to coordinate with a man who refitted my husband’s custom-fit knee brace (from ACL replacement surgery last fall) for pick-up or delivery. He is in Chevy Chase, MD which is a bit of a drive for me – an excruciating distance considering Mary does not like riding in the car.

He said he could drive it to my house, but in a way that made it seem like it was a sincere hardship for him. Since Bill had originally been fitted for this brace at his doctor’s office – local to me – I thought he must make routine drives out this way, but apparently not. Bill had driven to Chevy Chase for the refitting, and I guess the original salesman was gone. Maybe Bill had explained all this and I just didn’t listen…

So, I threw in my tale of woe – having to drive 6 little children all the way the Chevy Chase. Again, he said he could drive it out to me, he supposes, again with this begrudging attitude.

So I suggested he mail it. He seemed unsure about that. “It’s in a box,” he said. Well, good, I thought. The Post Office likes that. I suggested that First Class postage would be cheaper than gas. But he told me he would have to get approval from higher ups to do that. (Heaven forbid someone have to go through such red tape.) It would be better (easier) if he drove it over, but I would have to wait until he returned from his next week’s vacation.

Personally, I would have preferred that he get it in the mail today, instead of driving it over personally in two weeks, but since I’m putting the man out so much and I doubt he would have managed to secure approval in such a short amount of time to actually spend the $10 for postage (I think this thing weighs 8 ounces – it’s super high-tech), I felt like my only choices were to wait or to drive there myself.

So, sorry, honey, it’s going to be September before you get this thing.

The shadow of the old Arlen Specter emerged Wednesday when he echoed Republicans’ concerns that Sonia Sotomayor may say one thing at her confirmation hearing and do another as the next Supreme Court justice.

Sen. Specter, who recently switched parties from Republican to Democrat, expressed frustration over the nominee’s refusal to give specific answers on a number of legal issues and court rulings.

“Is there anything the Senate or Congress can do if a nominee says one thing seated at that table and does something exactly the opposite once they walk across the street?” he asked Sotomayor Wednesday during Day 3 of her confirmation hearings as she seeks to become the first Hispanic to sit on the high court.

I’ll bet there are plenty of Pennsylvania voters who want to know the same thing about Senators who switch parties. Perhaps the first and best opportunity to protect the interests of your constituency is to worry more about keeping your own promises instead of fretting about others keeping theirs.

If you are waiting for a phone call, it can be very frustrating and a test of your patience. Here are some tips to make that phone ring right away:

1. Rock the baby to sleep four rooms away from the nearest phone where you can hear the ring, but will not be able to get to it before it goes to voice mail.

3. If you take a shower, you must leave the phone in another room. Taking the phone with you guarantees that it will not ring.

4. Lie on the couch with the baby who was prematurely awakened from her nap. Decide that a few minutes to rest your own eyes is a great idea. I think Mom-naptimes are the best generators of phone calls. I usually get an average of one for every 15 minutes of dozing.

Unfortunately, though the phone may ring, it may not be the person you wanted to call. Try again the next day.

This awesome organization goes to Bangor, Maine to greet troops heading out or home from deployments (fueling stops tend to be Maine, somewhere in Europe, and then Kuwait).

Untold thousands of pictures have been taken of the soldiers and put on the web site for their families. We make a special effort to be there for as many of the outbound troops as possible since we have learned that these pictures are so treasured by their families.

I have to agree. I don’t know why, but having some nice ladies smiling and hugging my husband and going out of their way to make him feel special for one minute is comforting. I get all warm and fuzzy feeling.

They also send care packages to the troops. If you are looking for a great way to support the troops (and don’t actually know anyone), they happily accept donations to fund their work.

Bill passed through on July 10, Flight 2, top 2 pictures of page 5. He, like so many others photographed, was on the phone (with me) – last chance before international charges apply.