We’ve been here in Italy for ten months now, and I have dragged my children all over the place.  We went to Rome last February (no blog post, alas), Florence in April (again, no blog post), Venice a half dozen times because it’s so close, and all sorts of smaller cities.  We’ve also traveled to Germany, Switzerland, Slovakia, and Austria.  I love exposing my children to other cultures, to fabulous art, to buildings older than America, to structures older than Julius Caesar.  But, honestly, traveling with any large group of people is difficult, and traveling with seven children ranging in age from teenager to preschooler is even more challenging.  These are not “vacations” we take.  This is family team building, this is educational, this is work.  It’s worth it, oh, yes, but it is still work.

So when friends recently decided to travel on their vacation to Rome, Bill and I thought we would join them, leaving our kids home under the supervision of Fritz who is now 19.  Although I did miss them, it was lovely to not have to work for a few days.  Traveling without children is very different than when you have them along, and here are 12 tips for how I took best advantage of my temporary liberty from the noble labor of parenting:

1. Spend the night. For a full day of fun in Rome, it’s best to begin and end locally. It’s at least five and a half hours for me from my home to the hotel, so we left Friday afternoon and returned on Sunday. As an extra bonus, I did not have to share my bed with a five year old who for such a small person requires such a disproportionately large share.

2. Stay at Italian hotel. If you want to experience Rome, experience Rome. Staying at an American hotel generally means you will have top notch air conditioning, an American style breakfast, and someone to respond to your needs at any hour. Where’s the fun in that? For the best “when in Rome” adventure, stay at an Italian B&B. I do suggest you check reviews to be sure to get air conditioning, but do not expect temperatures to fall below 75 degrees. My favorite thing about Italian breakfasts is the pre-packaged toast, something you just don’t see in America. You can also buy toast at the grocery store, if you opt to stay at an AirB&B and have to fend for yourself. Just be sure to get some Nutella or jam to spread on these extra large croutons.

From the front of Santa Maria Maggiore (our B&B was to the left, not seen in this picture).

3. Take breaks at cafes. If you travel with seven children, as I normally do, sitting and enjoying a cappuccino or a spritz at an outdoor café is problematic. First of all, my family takes up between two and four tables. Secondly, my younger children find sitting around watching people walk by to be boring. Thirdly, café hopping can get expensive when you are feeding a family of nine. But if it’s only two adults, it is not overly expensive, and it is an enjoyable way to rest and hydrate before moving to your next destination.

4. Linger over meals. In Italy, waiters are not working for tips and desirous of quick table turnover to make more money. Americans might feel abandoned or ignored and consider the service to be poor if the waiter isn’t quick to hurry over the instant their glass is empty. Italians take their time with their meals, and do not want the waiter pestering them. If you reserve a table at a restaurant (recommended), they will not kick you out and will be perfectly happy if you sit there until closing time, even if you stop ordering food and drinks. So, do it. Sit. Enjoy the people with you. Savor the wine. Have dessert. Sip some limoncello.

5. Walk. With children, I quickly learn the mass transit system of any city. In Rome, with kids, we bought the unlimited travel tickets so we could get on any bus or the metro whenever we wanted. I did not walk them if a bus was available.  Not only did walking tire them out too much to enjoy what we were seeing, certain young children would beg constantly to be carried, making the walk even less fun for the big people. Visiting Rome without children, my sore feet will attest that we walked everywhere. When you walk, you see things you might not notice from the bus. You stop in stores and other buildings along the way, because, why not? When you walk, you need to take breaks, so you stop in cafes…

6. Use a paper map. Most hotels will supply you with a one page paper map of Rome with main attractions highlighted. These maps are simplified and inaccurate in their depictions of how things might actually look when you are standing on the street, but will give you a general sense of which direction you need to travel. Like walking instead of taking the bus, using a paper map instead of an online map program will cause you to see more things than maybe you intended, mainly because you will go down some wrong streets. That’s ok. Getting turned around or even lost is part of how you learn a city. I do suggest you stick to the mapped areas, though, and do not at all recommend simply wandering around. The idea is to have fun, not risk your safety. 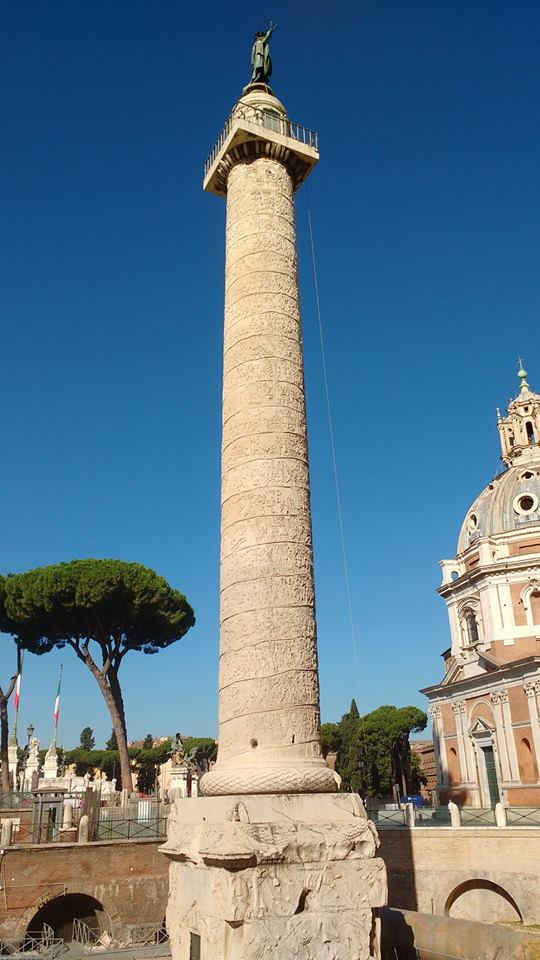 Trajan’s Column.  We weren’t looking for it.  We were just roughly heading in a particular direction and there it was.

7. Take a guided tour. A good guided tour is worth every penny. I have done guided tours with kids, too, and with good results. But usually with children, a guided tour means no escape when a kid is bored, needs to use the restroom, or is on the brink of a meltdown. Without children, adults can get the most out of a guide.

I was surprised and delighted to see this picture, which I love, in the Vatican.  I really didn’t know it was there.  When you look at art, and don’t expect to actually ever be able to see it, you don’t really pay close attention to where it is.

Not a great picture with my phone, but the afternoon sun in the Basilica of St. Peter’s is pretty cool.

Swiss guards.  I had to take their picture, but I felt like a dork. 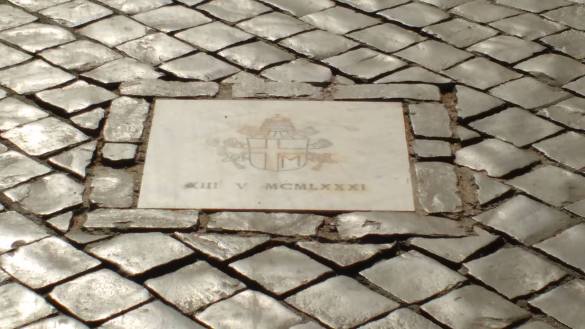 The spot in the square where Pope John Paul II was shot.  That is his coat of arms.

8. Splurge on something. Maybe you want an expensive souvenir. Maybe you want to eat at a top notch restaurant. For me, the splurge was to take not just a guided tour, but a private guided tour of the Vatican. When your guide only has to please two people, she can quickly figure out what you know, what you like, and what you want to see. You don’t have to listen to other people’s questions and comments. You don’t have to wait for other people to finish looking at something before you move on, and you don’t have to feel guilty about spending more time on things that interest you. But if tours aren’t your thing, maybe get that $90 bottle of Chianti instead.

Private tour guides will take your picture for you.

9. Do things your kids roll their eyes at.  Let’s face it: the mother of a family of nine cannot expect to please everybody all the time.  Sometimes, you will have to force children (or the husband or yourself) to participate in things that happen to be unappealing.  Yes, we are going to go into this church.  Yes, I know it’s the sixth church today.  No, I do not promise it will be the last church.  And I’m sure my children will not agree, but I really do hold back on suggesting things because I know they are on the brink of mutiny.  But, with no children along, the frequent stops, the multiple churches, the museums, the long coffee breaks, the indecision over which refrigerator magnet to buy, the long dinner with old friends…all can be done without a chorus of complaints.

10. Sit down and relax at a church you want to enjoy.  This churches in Rome are free and have some of the best artwork.  Pay, if you want, to enter the many museums which also house many wonderful pieces, but there is so much to see without spending a dime.  So much, in fact, that many churches will absolutely overwhelm you.  The best way to take it in is to just sit down for a bit.  Now, sitting on the floor is frowned upon, and many churches do not have pews or chairs set up for just chillin’, so, the best way to do this is to go to mass.  Especially if the mass is in Italian and you don’t happen to speak much Italian, you will have the opportunity to stare at the walls and ceiling for 30-45 minutes and not feel overly guilty about not paying attention to the readings and the homily.

11. Be spontaneous.  My kids drive me nuts with expecting a minute by minute agenda.  And heaven forbid I decide to do Thing C after Thing A and hold off on Thing B until later…or add in Thing D because it’s right there.  Even my teenagers balk when plans change and have a hard time with flexibility.  Without children, I only have to worry about myself and my husband and we are both capable of adapting plans on the fly.  In Rome, it is not unusual to pass by a church every few minutes.  Bill and I, more often than not, went inside.  I don’t know all the churches in Rome.  I don’t have memorized all the locations of every piece of artwork in Rome.  If you randomly go into a church in Rome, you are bound to see something interesting.  Yesterday, we were walking up the side aisle of just another random church.  Bill nudged me and pointed ahead.  “Is that…Moses?” I asked.  Yes, yes, it was Moses, carved by Michelangelo for Pope Julius II’s tomb.  Oh, and right next to it were the chains that held St. Peter when he was in prison in Jerusalem.

The name of the church is San Pietro in Vincoli which means St. Peter in something or other…what might that translate to?  Let’s see…

12. Stay up late.  Rome comes alive long after the typical American mom wants to be home in her PJs.  Commonly, dinner begins at 8 pm or later, especially in the hot summer.  While Bill and I were sweltering during an afternoon tour of the Vatican, Italians not involved in catering to the tens of thousands of tourists would have found themselves a shady spot to eat a leisurely lunch and take a midday rest.  Once the sun goes down and things are a bit cooler, the Italians take to the streets, and the sidewalk tables are full.  Children are not left at home, and it is very common to see children of all ages out at 10 pm.  You could head back to your hotel, but if you followed my advice and stayed at an Italian B&B, you might find that the restaurant under your window is in full swing until quite late.  It’s much better to just be a part of the noise instead of letting it bother you! 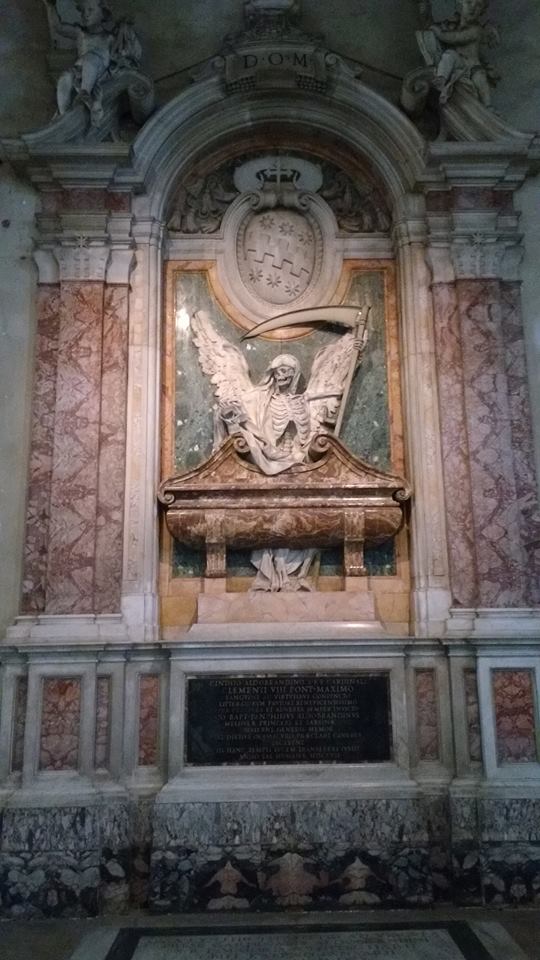 Just be sure that all the fun you have is on the up-and-up.  The Grim Reaper wants to remind you to be good.