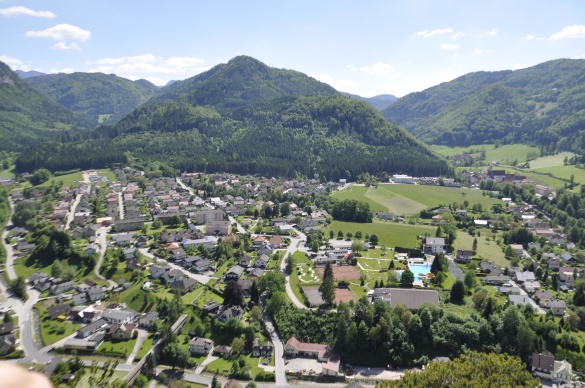 Memorial Day weekend, we went to Austria.  The big kids all attended a retreat at Franciscan University’s campus in Gaming.  I can think of no prettier location to spend a semester abroad.  My photos can’t do it justice. 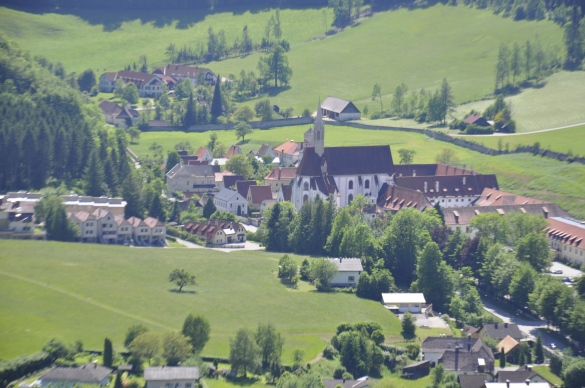 The church and former monastery where Franciscan has its campus.

There’s not much to do in Gaming, other than take walks and drink the Kartause Bier, dunkel or helles; I recommend them both. 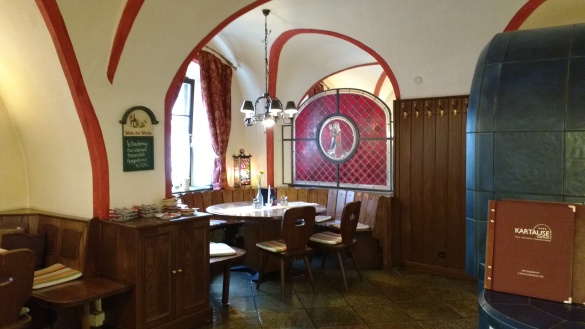 One of the dining rooms at the Kartause Hotel – our future basement bar will be modeled after this: vaulted ceiling, round wooden bench and table, stained glass window.

The former monastery, now a hotel and Franciscan’s campus.

The hills are alive!

Rolling down the mountainside

The kids could not resist rolling down the “hill.”  When I was a kid, I really loved rolling down hills.  In my backyard.  I never rolled down an Alp. 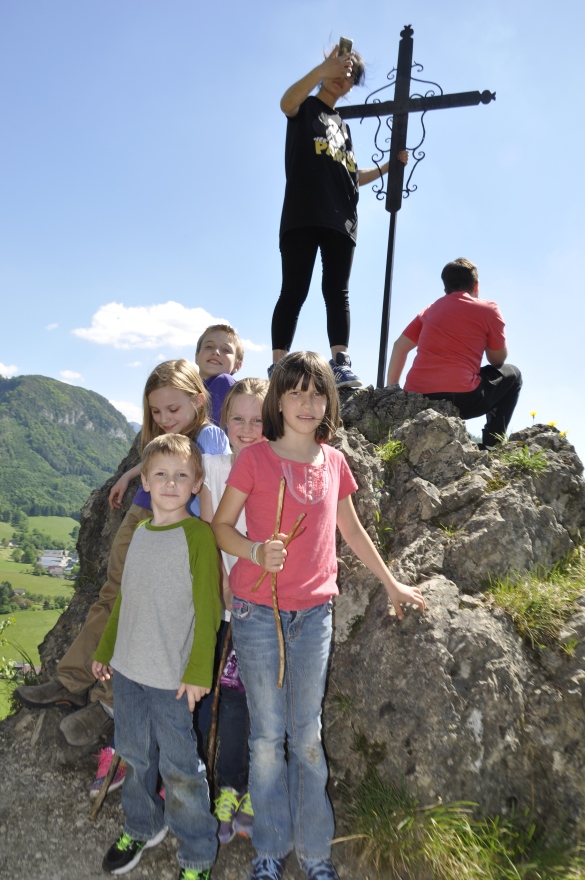 Another hike took us across town to a different mountain.  At one overlook, there is an iron cross and a nice view of the city. 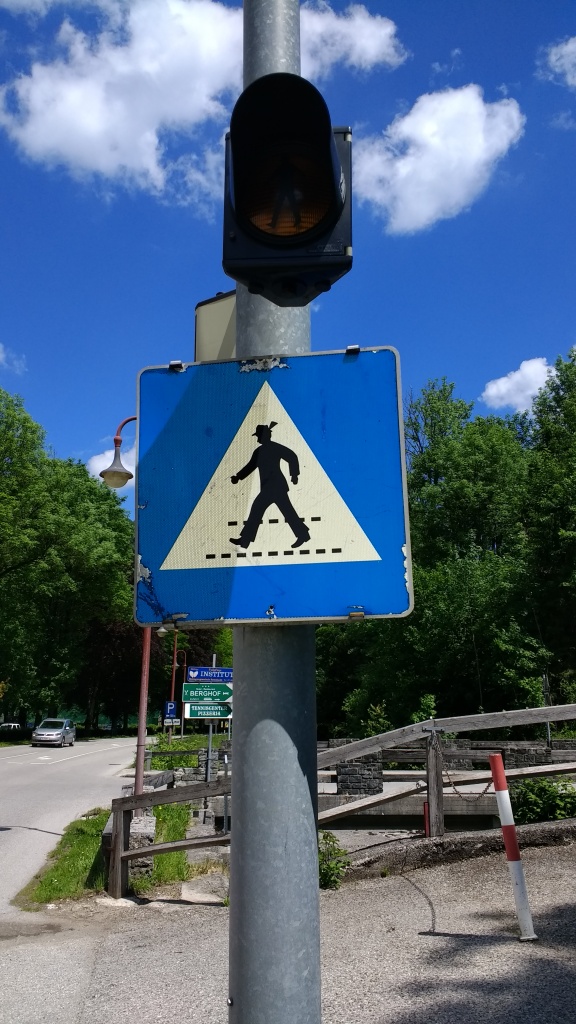 After mass and then lunch on Sunday, we headed to Salzburg.  My teens had stayed up late and gotten up early for two days, and were now resistant to the idea of sight-seeing; yet when offered the opportunity to stay behind at the hotel with their little siblings while Mom and Dad went out on their own? Oh, no, they were afraid they would miss something.  We kept to a fairly light itinerary.

Monday morning, we “dragged” them to Fortress Hohensalzburg which is THE landmark of Salzburg, dominating the landscape.  The camera had been inadvertently switched to black and white photos… 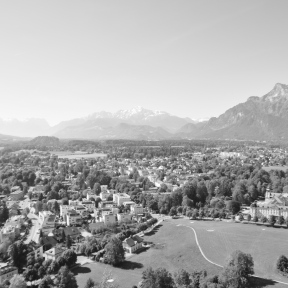 View from the walls

View from the walls 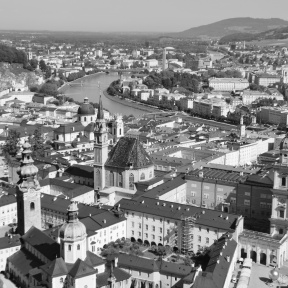 Looking down on Salzburg

The fortress was its own little town with buildings incorporated in the walls and lots of room for all the things one might need to withstand a siege.  We thought this video about how they fooled some angry townsfolk who had nearly managed to starve them out was pretty amusing.  We watched all the videos available at this website, actually.

Bill discovered the color issue with the camera just in time to get these lovely flowers growing in crevices of the fortress walls. 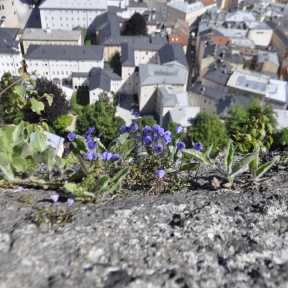 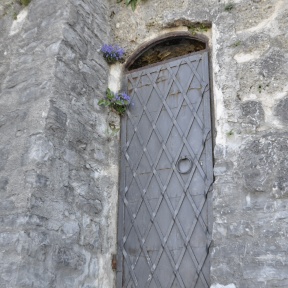 After this castle, we decided to tour the house (now museum) where Mozart was born and lived until he was 16 or 17.  It is a nice museum, self-guided (which is great for people with kids), and has some interactive areas (of which we did not avail).  My only complaint was that there was only one room that actually played his music.  Wouldn’t you think having his music in the background would be nice?

We tried to convince our kids that hanging out at the hotel without parents would be fun, but instead, after a brief rest, we went to the gardens at Mirabell Palace.  Yes, this is where much of the Do-Re-Mi song was filmed.  The gardens are free to enter, and are very beautiful.  We wanted to line the kids up on the steps where they finished out the song, but George refused to play along.  Always somebody. 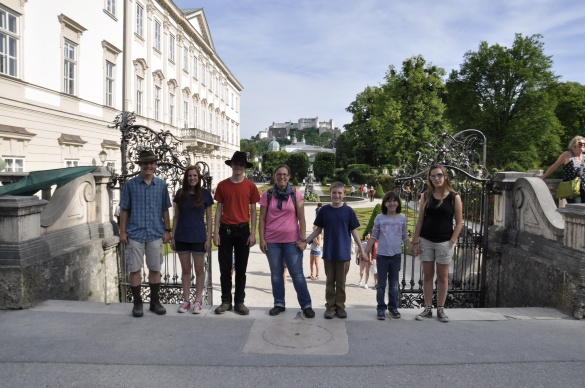 Running in the tunnels 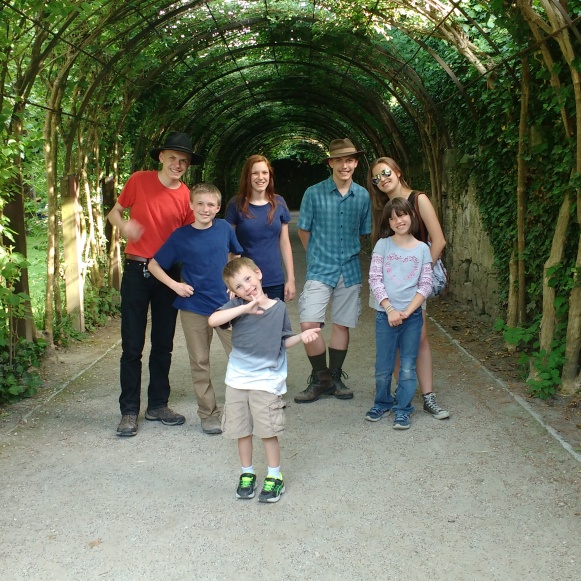 This is a medieval castle, originally used as a toll/customs stop.  The original road went right through the castle, and one had to pay to go through.  This castle is off the beaten path.  I’m sure some days it is quite busy, but I suspect that the primary clients are school children dragged here on what they think will be a hellishly boring field trip.

Why I liked this castle: 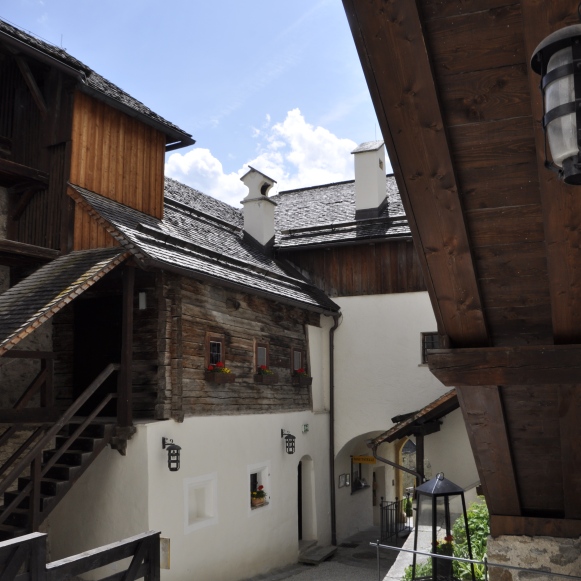 Everybody standing around listening to the tour guide. 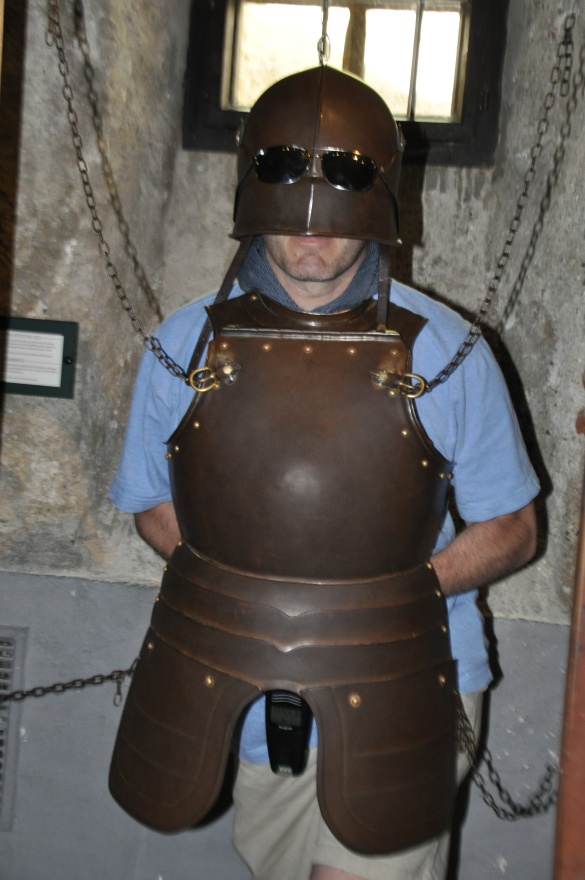 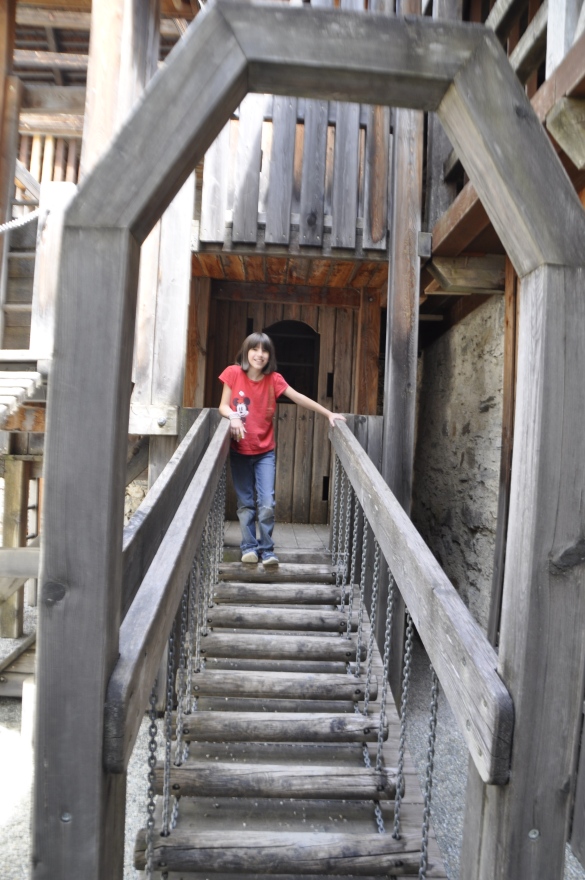 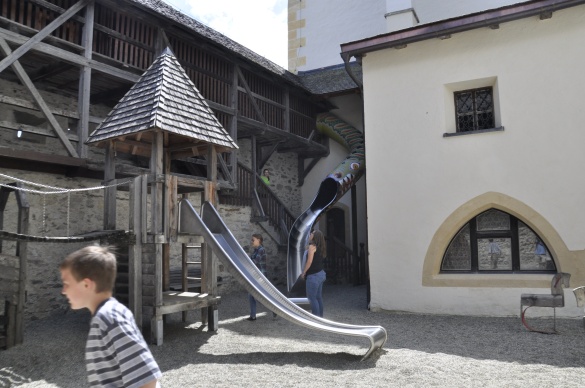 After this, we found a place to eat and headed for home.  Good times for everybody.

One of my favorite new drinks here in Italy is the Aperol Spritz.  I also like them with Campari, but my preference is Aperol.  I was making one just now.

“Having a spritz?” asked Fritz.

Unfortunately for you folks back Stateside, Aperol is not cheap.  Twice the price as it is here.  Ouch.  I will be stocking up before we return, that’s for sure.

If you’d like to try one, here is the recipe:

Fill wine glass with ice, add the liquids, garnish with a slice of orange, and stir.

Prosecco is a white, sparkling wine.  I had never heard of it, or Aperol, before I came to Italy.  It is also half the price here vs. anywhere in the US.  I get mine, often, from the local wine shop that has it and about 20 other wines on tap.  I bring my own bottles, and we walk out of there with 8 liters of wine for about $20.  This wineshop is why I know Italian numbers.  I could say “quindici” which is 15…and I like the #15 wine which is a frizzante (bubbly) red…but I had to learn the other numbers so I could try the other wines.

You can substitute another sparkling white wine for the prosecco, but I can’t guarantee that it will taste as good.

In Garmisch, Germany, I had an excellent weissbier spritz, using weissbier instead of prosecco.

Locally, they also recommend a limoncello spritz, but in this one, the limoncello replaces the aperol.  Limoncello is another beverage that was unknown to me before coming here, and one that I have taken quite a fancy to.  It is usually served as an after-dinner drink and often is provided without charge at restaurants.  One restaurant in Florence gave Bill and I a second shot of limoncello…we had sent all the kids back to the apartment after dinner and stayed behind to savor a moment of peace and quiet.  The Italians know that everything is better with a little alcohol.