Peter should have made his First Holy Communion earlier this month, but Bill’s travel for work has had him gone every weekend until this one.  Extended family arrives today and tomorrow.  It’s a crazy-busy weekend with 7 extra people staying here and both sets of grandparents staying in hotels.

My parents, and 2 siblings are driving here today and should arrive around dinner time.  My other sister and her family left their home in Tennessee after noon yesterday.  Originally, they had planned to stop in a hotel, and then we would all meet up at Busch Gardens today.  When I realized her plans were to push through to a local hotel, I suggested she just come here.  I did not tell my children so that their 2 am arrival would be a quick, quiet hello and goodnight.

Katie almost caught me (“Why is Aunt Barb asking for our house number if we’re meeting them at Busch Gardens?”), but otherwise, I had them nicely sequestered in our out-of-the-way bonus room, and there they remain, sleeping.  Three of my kids were up early, and I knew the cat would be out of the bag when I moved their car so Bill could get to work.  Sure enough, they were thrilled to learn the truth.

Oh, and my husband had to go to work.  Did you read above where I said that every single weekend this month has been disrupted by his travel?  He put in for leave today and everything was fine.  Then he called on his way home last night and said he had to attend a meeting today.  I was…disappointed.  I sent my sister a text:

“My ex-husband just called to say he had to work tomorrow.”

“He loves his mistress (the Army) more than me.”

She responded, “Silly, Michelle, YOU are the mistress.”

Fortunately, this meeting, while inconveniently in the late morning, should be short, and he can join us for the afternoon.  Should be fun. 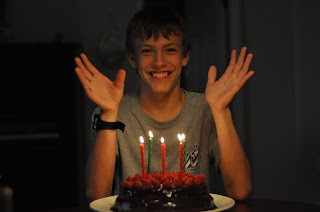 Today was Fritz’s birthday (observed).  Tomorrow, his actual birthday, he will be attending his ordeal for the Order of the Arrow, so we decided to have his party tonight.  His requested birthday dinner was Italian subs and Cape Cod potato chips.

And he requested that we watch the movie Brave.

Not because he really wanted to see it, but because he wants to see the next movie in the queue: The Hobbit.

For dessert, he selected a raspberry chocolate cake. 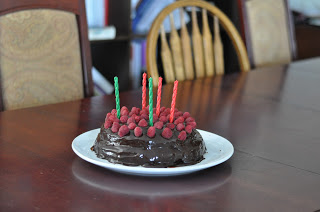 He found out there was sour cream in it, and I had to convince him that all it did was make the cake moist. Oh, my, the cake was delicious.  Doesn’t it look great?  I was showing Katie how this one lens I have blurs everything except the one thing you want in focus.  In the picture above, all those loose papers on our school shelves don’t look quite so messy.  Here below, the cake looks downright decadent.

Fritz is showing me where to cut his piece:

My girls did most of the work.  I did the frosting, which was a ganache, so all I really did was pour it over the top and smooth it out.

Happy birthday to my 15 year old!

This girl cracks me up.

She was tattling on a sibling, which I don’t encourage.  It does, though, often provide useful information.

One of my children has been in a mood this week, and this mood has not been a good mood.  Everybody has been most displeased with this child’s behavior, attitude, and ability to keep one’s hands to oneself (or lack thereof).  This is a child of extremes, because when this child is not exploring new ways to offend others, this child is the most generous and considerate of all my children.  This child receives frequent reminders to listen to the “white guy” on the shoulder, not the “red guy with horns.”

So, new bad behavior, because if there are rules, one must break them at some point: Mary tells me that this sibling had been saying “Mary’s son’s name – and s/he wasn’t praying!”  I asked the accused to confirm or deny the charges, and the look of guilt was all I needed in reply.

At dinner, I told Bill about what Mary had said.  I especially liked the phrase “Mary’s son’s name,” but I’m really pleased that she is obviously getting catechized by osmosis.  Gotta love homeschooling.

Bill delivered a stern look to the guilty party, who did not appear to be sorry for anything other than getting caught.  This child is too much like the worst of me.  (sigh)

“I’m just amazed that the 5 year old is aware that this was wrong,” I told Bill.

Mary piped up: “That’s because the 5 year old is AMESOME!”

And there you go.

Hey, Moms!  It’s time to sign up for summer camp!  Not for the kids…for YOU!

We have a great summer lined up here at How’i’wish Island.  I do want to warn you that many of the merit badges required for your SuperMom rank will not be offered at this camp.  This includes badges on child development from Infant to Teens, scheduling badges like Time Management, Multi-Tasking and Bi-Location, as well as badges like Homework, Chores, and College Applications.  It is our philosophy that those badges can be earned best throughout the year as needed.

Nevertheless, I assure you that the badges we do offer will be challenging and fun!

First off, we have many badges to appeal to your creative side.  From Scrapbooking to Photography, Knitting to Sewing, Painting, Drawing, Cake Decorating, and more!  New this year is Writing which will include blogging and other social media as formats for expressing your thoughts.

For those of you who enjoy cooking, we have several badges that may interest you.  The Surf and Turf badge explores recipes beyond pasta and pizza.  Learn how to make a perfect hollandaise sauce and remember how to savor every bite.  This badge will only be offered in the two time slots before lunch and dinner.  Also, check out our popular Internet Cooking badge.  Learn to navigate the world wide web to find the best recipes.  This badge does have a lengthy requirement to track several sites for 12 weeks and analyze your “likes” for nutritional content.  If that is not completed beforehand, we will not be able to present you with your badge at the end of camp, but you can always finish it later!

The Coffee and Tea badges have been combined into one time period.  That early morning time slot fills up quickly, so don’t wait!  For afternoons and evenings, we have another popular badge: Cocktails.  There is an additional fee associated with this badge.

For those who want to exercise, we have a wide variety of options.  Gym Time is a potpourri of typical classes from Spin to Zumba.  These are also offered individually for those who already know what they love.  We have Swimming which focuses on actually swimming and not lifeguarding.  The 5K badge is customized to work for both beginners and those who have been running for years.  Or take one of the many trails on How’i’wish Island while you earn your Hiking merit badge.

After lunch, we have our Napping badge, which also has a prerequisite.  Candidates must take at least 8 naps of 30 minutes and 2 naps of over an hour before coming to camp or they will not finish the badge.  If napping is not your thing, we have both the Massage and Mani-Pedi badges available.  These are offered pool-side as well as in the privacy of your own cabin.

The Reading badge will be offered all day long.  Consider combining it with our Book Club badge or our Movie Lit badge, in which you compare books to their movies.

All campers are required to take the Single-Tasking merit badge.  We have found that campers get more out of their camp experience if they learn how to slow down and do just one thing.  Please also note that early mornings are reserved for meditation and prayer (and sleep), so no loud noises are permitted before 10 am.

Since we want How’i’wish Island to be the ultimate get-a-way camp for busy moms, please let us know what other merit badges we should be offering!

The other day, Mary came up to me and announced:

“Mom, I have a drinking problem.”

Her throat was feeling a bit sore.

BTW, I do not correct my children when they say things like this.  It’s much more amusing to just smile and nod and let them talk.

Saw an article via FB that said poll results indicate that moms think 3 kids are the hardest number to manage.  As my husband says, switching to zone defense from one-on-one coverage is difficult.  But the article covered families of 1-4 children.  In my personal experience, SIX was a killer.

The root cause of my drinking problem.

I suppose I should blog more often than once a month.

I do post on FB, but that’s only because it’s easier, when the Kindle is working.  Right now it’s dead, and not charging.

Most of my FB activity is all #Gosnell this or Boy Scouts that.  I did post about eagerly anticipating the end of May, because I have arranged for the kids to be off music lessons and gymnastics/sports for June, July, and August.  We all need a break from the constant running.

Took George to the doctor today.  The doctor praised me for catching his ear infection so quickly.  No clever detective work occurred.  If I find myself strapping a kid into a car seat at 1 am and going for a drive to get him to fall asleep, something is wrong.

After his appointment, I had to get the antibiotics at the clinic’s pharmacy.  I waited for over 45 minutes, with a hungry baby who had an ear infection.  I thought I was going to lose it, and the only thing that saved me was another mom with two little kids in tow who was also waiting and who did vocalize her frustration to the people at the pharmacy.

I gave her a mental fist bump.

While I waited, I had plenty of time to think about how the doctor tried to look in George’s throat, and he wasn’t complying, so she pried his jaw apart with her fingers and held his tongue down.  No big deal – I do that move multiple times every day as he finds things on the floor.

Except she wasn’t wearing gloves.

And except I realized, in the interminable wait for Augmentin, that she had not washed her hands when she came into the exam room.

I’m not a germophobe…but with doctors’ offices, I AM a germophobe.  Can’t wait to see what lovely viruses he brought home today.

Since I have been accused, by my not-spontaneous children, that I do not give enough warning about upcoming, unexpected events, I informed them at dinner that we were all going to a sports banquet tomorrow evening.

They all nodded OK.

They all nodded OK.

“The theme is Italian,” I said, absently, thinking about the covered dish I planned to make.

My reverie was disturbed by the animated discussion of my children about how they would accomplish this theme.  Fritz thought he would draw a thin, black moustache on his face.  Billy thought he would wear his father’s fedora.  I’m pretty sure I heard the phrase “tommy gun” before I interrupted.

“The theme is for the food, not the clothes!!”

And that was the end of that conversation.