Bill and I have been emailing memories back and forth this month. Today is our 14th anniversary. And because we both like to keep things neat, we married on the same day we began to date. That anniversary is our 20th. I was 18; he was 21.

I don’t think most people will “get” many of these one-liners. They’re not for you – they are for us. His are in bold, and mine are in italic. These are just the ones from our engagement, wedding and honeymoon. (Note: his are romantic, mine are sarcastic, witty or detailed)

perfect weather and beautiful pictures at a gorgeous park

realizing we had no keys to the getaway car

what do you mean the office is closed?

Bartering for a hotel room

trying to spell our last name using a combination of German and English letters and not being able to find the keys or my wallet or whatever and having to go back to the pension only to find they were with me the whole time (aka: when you find out you married a ditz).

Disappointment at Nymphenburg (swans in the mud)

The bridge at Neuschwanstein

And that smaller castle with one bedroom and the table that lowered to the basement kitchen. (Schloss Linderhof)

And finally, a terrible train ride, a long flight, an end to a honeymoon, but the beginning of a beautiful marriage.

I was having an OK evening, until I read this.

He was a loving, married father with six children. His children were 8, 7, 6, 4, 3 and 1 years old. He was scheduled to go on leave in two days. He was thrilled to be going home to be with his family and was looking forward to sitting on the floor of his den with all of his children surrounding him. One of his primary desires was to go home and cook a meal for his children.

Kerry, the soldier who wrote those words, has been included in our family’s evening prayers since the beginning of his deployment.

The family of this fallen soldier will now be prayed for in the silence of my heart. Some things, you just can not share with your children.

Dressed for Mass. I’ve been fighting this girl for over a week now with the new clothes that she doesn’t like. Mary Janes? Tights? No way, she says. New pants? New shirts? What’s wrong with the summer clothes? She remembers this dress from early spring, so at least I have that.

Birthday girl. I forgot to mention that Jenny had one of these last weekend. Yesterday she asked me if I wished I were 6 again. I told her when I was 6, I didn’t have her daddy or her or her brothers and sisters in my life, so, no, I would not want to be 6 again. (Oh, but to have that simple life…)

Peter is posing with his “new” football outfit. This fit Billy not too long ago. Billy is thrilled that now he and Peter can play on the same team (Billy has a bigger jersey now). Amazingly, Billy will wear Fritz’s old Packers jersey, as long as they aren’t playing each other like last weekend.

The other day, Bill got to go to a village and pass out food and other goodies. It’s an enjoyable mission, except that he had to wear his 45 pound body armor the whole time. Imagine walking around with a 5 year old on your shoulders for 6 hours.

While there, a little boy, 6 years old, threw himself over the concertina wire just so he could get to the front of the line. I guess he cut himself pretty badly, but I guess he also thought it was worth it.

This is what an Afghani kid will do to get first dibs on a candy bar. (**See note below)

The catalogs have started to come. They don’t yet say “Holiday” or “Christmas” but you know that’s what they’re gearing up for. While I welcome yet another sign that the end of the year, and the end of my purgatory, are approaching, catalogs do not make me happy. The vast majority of these thick, glossy advertisements get put immediately into the recycle bucket. I have learned that I won’t care what I’m missing if I don’t see it. My children are not so wise, though. They have been snatching up the toy catalogs and poring through them as though the ultimate source of happiness could be found therein.

Today, having sat through another child showing me all the wonderful things that would make her the perfect, dutiful and loving child simply because her happiness at having all this stuff would make her thus, I called the children around and told them about the Afghani boy. I told them they needed to start thinking about what they could do for other people for Christmas instead of what they could get for themselves. And I told them to think of ONE, and only ONE thing they they really wanted for Christmas. And tell me in November.

I’m sure this isn’t the end of it.

My daughters were fascinated by the Yorkshire Terrier in the dog stroller. I think this was their first encounter with someone who treats a dog like a baby. As we left the Scout Hut, the woman who owned the dog told me she gave a stuffed animal terrier to Katie – her adolescent daughter having outgrown it. Katie was, of course, thrilled.

Later, Jenny was crying because Katie wouldn’t share the dog. “She promised,” Jenny wailed. Katie denied making any such promises.

“Katie,” I said, “You didn’t earn this dog. Somebody just gave it to you out of the generosity of their heart. Don’t you think you ought to share it and be just as generous as they were?”

“Well, Mom,” she said with angelic sincerity, “I was thinking we could send this dog to Afghanistan for the children there to have.”

Perhaps another mother would be fooled by such a sweet sentiment. “That may be a good idea. But in the meantime, can you not share with your sister? Or is it easier to share with a stranger than with your sibling?”

Bingo. She started to cry. In truth, she would rather give the toy away than share with Jenny. This is human nature. We all do this in one form or another. “Love your neighbor” is much much harder than “Donate anonymously to poor people.”

Sharing with your sister hurts. You don’t care what you’re missing if you don’t see it. But watching your sister play with your toy is torturous.

The dog may or may not head for Afghanistan and some little child may or may not get himself some stitches in addition to a stuffed animal. Dr. Ray Guarendi says and writes repeatedly that you need to get rid of your kids’ stuff if you want them to be generous. The more stuff they have, the more selfish they are.

The more stuff we have, the more selfish we are.

These are the thoughts I ponder as I begin to write shopping lists.

** Note: my husband emailed to tell me that the kid was 14 and was going to such extremes to get flour or rice, not candy. It makes the story worse on both accounts: he was old enough to understand the consequences and he felt those risks were worth it for mere food staples. 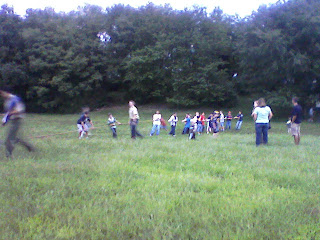 I thoroughly enjoyed watching the Cub Scouts do a tug of war at our Back to Scouting night the other week. I also loved to see the Boy Scouts and adult leaders “helping.” Although the field looks fairly flat, this side of the rope had a slight downhill, and they always won, no matter how they kept dividing the boys. So a few of the men got in there and were throwing their weight around – literally – first to one side and then the other.

A tug of war is one of those things that you do wholly. Every ounce of your mind, strength, and soul is there pulling on that rope. Most activities don’t necessarily fully engage you. You can pick daisies in the outfield during a ball game or kick the dirt in the dugout while waiting for your turn at bat. You can build a fort and prepare for the enemy’s attack, but still notice that your sister borrowed your scooter without asking. You can read a great book, but still be aware that your mom is on the phone arranging a play date with a good friend.

But when you play tug of war, you are on a mission and the whole world disappears for five minutes. And you can’t lose, as long as you don’t…let…go……

I sat Mary on the counter so I could blow my nose. That’s hard to do with a tot in your arms. Then I left her there and moved about 5 feet way to make the coffee.

“Help! Help!” she called. I continued to make the coffee.

“I’m falling!” she persisted. I turned to confirm what my peripheral vision assured me was true. There she sat, perfectly fine, with her arms outstretched and her face smiling.

I will catch you, little one.

The Centers for Disease Control and Prevention even went as far as to recommend sick students wear surgical masks when they kiss.

Reit This Way
Blog at WordPress.com.