The dog decided to come along too.

And I happened to realize on the way that I had left my cell phone behind.

After dropping my husband off amidst so many tears you might have thought he was heading off to war, I returned to our little town and went to the barber shop.  Mary and Peter had fallen asleep, so I left Katie and Jenny in the car, parked right out front, to monitor them.  I got the boys in line.  Jenny kept going from the car to the shop and in no time at all, Peter was awake and playing in the corner with the toys.  A few minutes later, Katie comes in with Mary on her hip.

After Katie deposits Mary on my lap, she says she’s going back to the car for the keys.  It was a warm day, and I had left the car running with the air on.  A second later, she returns to tearfully tell me she had hit the automatic lock on the way out.  So, the keys are in the car, which is running and keeping the dog cool.

And my cell phone is at home.

I have several friends who would happily respond to my need for help, but I don’t know their phone numbers.  That’s what the cell phone is for, right?

The barber shop had a phone book, but a quick flip through it did not reveal the names I sought.  That’s the problem with having transient military friends.

While Fritz had his head shaved and Billy had his hair trimmed, I sat and thought.  I estimated I was 3 miles from home, and the road, which I have biked and run, is not a good one to walk with children.  I have AAA, but that would have taken up to another hour of my day which was rapidly approaching dinnertime.  Fortunately, I do live in a small town, and my dentist is also my neighbor’s dentist and was located about 200 yards down the street.  After Fritz was done, I sent him to the dentist’s office to ask them to call our friend who was able to get spare keys from our house and drive them over with very little waiting on our part.

I really hope my husband can take the boys to get their haircuts from now on.

Meanwhile, my husband, visiting Texas, has some free time.  He finds a barber shop which bills itself as a man’s barber shop.  When he tells me this, I immediately think of pinups on the wall, but he describes the pool table in the corner and the strong smell of aftershave.  As he takes a seat, someone asks him if he’d like a beer while he waited.  And not just any beer, no, a bottled local brew.

“How much was the haircut?” I ask.

Fortunately, we’re not moving there any time soon, so it won’t be a habit.

Back to Fritz: when he got his ** “high and tight, skin on the sides” ** the barber finished him up with a good dousing of aftershave.  He smelled so good and reminded me of his dad every time he passed near me that afternoon and evening.

Of course, he hated it, and happily took a shower at his first opportunity just to rid himself of the stench. 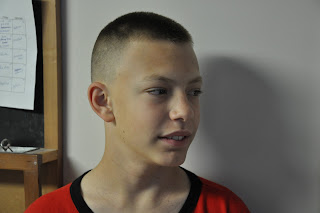 ** For those of you unfamiliar with the terminology of a military haircut, a high and tight is when the sides and back are very short and most of the hair is on top.  Skin on the sides means that you shave it all the way down.  Fritz got this cut nearly a week ago, so you can see it’s growing back already.