George had his 2 month checkup last week.  We are now at the point where he only gets a bottle for my convenience, not out of necessity.  I’m confident in my milk supply and positively convinced that he is satisfied with his feedings.  He nurses often, yes – all my children did.  But he’s not constantly clamoring for more and unhappy all the time.  No, that was how things were in July and some of August.  But not now. 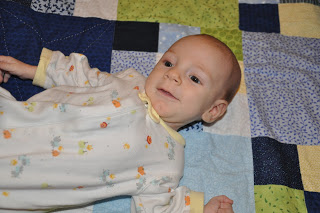 And yet…oh, the child is scrawny.  And the doctor was very unhappy with the reading on the scale.  “This is the World Health growth chart,” she said, meaning not just well-fed Americans were used to calculate the data, “and he’s at zero.”  Zero.  Hey, Mom, you’re a big failure.  Your kid’s a big fat skinny zero.

Ideally, they want babies to gain an ounce a day, but a half ounce a day is still acceptable.  He is at that bottom range.  I think, since he hasn’t been to see a doctor since he was 2 weeks old, that his gain is better now than it was a month ago, but she wants me to come back in 3 weeks to prove it.

BTW, we discussed the whole issue with not being able to come in for a weight check at one month, and she said that I could have called the nurses at the clinic directly or brought him in for a sick child appointment instead of a well-baby weight check or whatever I mistakenly called it.  She wasn’t being accusatory, as in, I should have done it…rather, helpful, as in, here’s how to game the system.  This makes me really mad – not for me, because I already know those tricks – but for other moms, including myself back in 2003 when Bill was deployed and I was negotiating Tricare for the first time and I had a starving newborn and really needed help.

Weight issues aside, this kid is a cutie.  He is happy, interactive, alert.  When the nurse came to do his shots, he completely derailed her litany of what to expect and how to deal with it by his smiles and facial expressions.  And even after getting three shots, he calmed down very quickly.  He’s just easy to please.  Within reason.

School with a newborn is difficult, even if he is good-natured.  The big kids help out by holding him whenever I let them.  I think Billy is reading history or geography here. 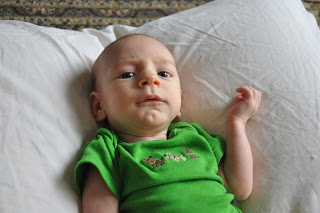 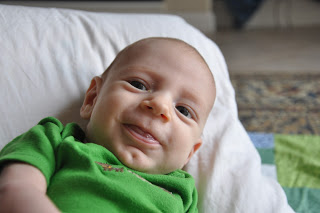 I see this view a lot: baby slung over a sibling’s shoulder.  I’m still his favorite, but he loves everybody. 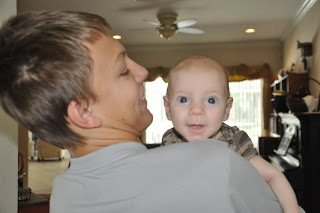 Do you think my boys need haircuts?  Not the little guy, but the big ones.

The only thing, developmentally, I’ve noticed about George is that he doesn’t coo as much as my other kids did.  Maybe it’s still early.  I remember Mary didn’t use many words when she was 15-18 months old, but she cooed when she was an infant.  Maybe he’ll be the opposite: silent unless speaking profound thoughts.  I think his genes are making that unlikely.

All of these pictures were taken in the last week.  George doesn’t mind being placed on his tummy as long as it’s not for too long.  Katie has gotten him to roll over, but his arm was just right.  He doesn’t know yet how to make his arm just right.  When the earlier photos were taken, he was doing a good job holding up his head.  By the last photo, he was pushing up his chest as well.  By the time I got the camera, he was tired, so it was not nearly as high as it had been.  But they grow so quickly, these babies. 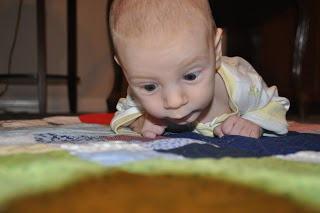 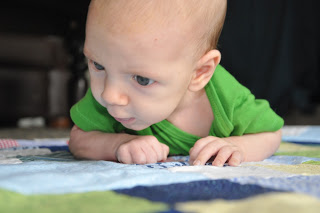 And do you see that intently focused look in those top two photos?  He is, I am sure, admiring the neat hand-stitching of his new quilt, a gift from Barbara.  Isn’t it pretty?