I am back-dating this post to January, because that is how old the pictures are.  The post really belongs with Christmas, and if I don’t put it close to that time frame, I’ll never find it in the archives.  Those who read me via a reader will probably see it.  Those who go straight to my blog probably won’t, so I hope to do a summary post after I finally publish all these old photos, so my mom and others don’t miss them.

The kids were given a free hand with their gingerbread houses.  I bought kits, because I did not have the energy to make them myself.  Bill assembled them one night, and then the next day we just let them go to town.  I think I know which belongs to whom; I definitely know three of them.

This one is Katie’s house.  There is lots of activity.

Please note the man burying his friend in the snow.  One shovelful left to go.

I can not identify the owner of this house.  Fritz? Mary? Jenny?  Fritz was very apathetic to the whole project, so lack of skill is no indication of artist in his case.

This house with the Star Wars battle scene is definitely Billy’s.

Note the figure impaled on the top of the Christmas tree.  Because nothing says “Christmas” quite like fantasy death and destruction.

I don’t even know who the good guys are.

But I trust that St. Nicholas is offering an appropriate blessing to the right side.  The angel, though, has more important things to look after.

Not sure who made this house.  If I had to guess, I would think this understated one was Fritz’s and the really goopy one was Mary’s.  I think Jenny did a gingerbread train.

And now for Peter’s house.  Another one with lots of interesting things going on.  I think this one has a cop and robber theme.  Again, why such violent drama is included in what was supposed to be Christmas decorations is unknown.  I did mention that the kids were completely unsupervised on this project, right? 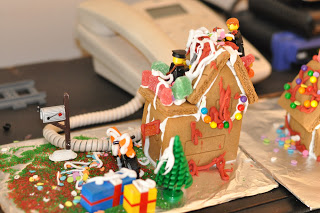 When Peter showed me the house, I mistook the red icing going up the side as flames.  “The house is on fire?” I asked him.

“No, Mom,” he said in that offended tone of a misunderstood artist.  “That’s not fire.  That’s blood.”

Uh, Merry Christmas to you, too.