After the parade, we headed up the street to the Coca-Cola Museum.  The previous night at the Aquarium, we purchased “Pemberton Place Passes” which, for a minor discount, paid for admission to both the Aquarium and World of Coca-Cola.  Note that active duty military get in for free to Coke, and that the military discount on the passes was decent.  The truly nice thing about having the passes, though, was not having to wait in line for a ticket.  As luck would have it, there was no line for admittance at that moment, so we breezed right in.

Truth be told, I am not currently a huge fan of carbonated beverages, although I did routinely drink Diet Coke up until a few years ago.  Those of you with soda addictions?  I just don’t get it.  Coffee, yes.  Coke, no.  I thought the museum would be fun, and thought there would be a production line the kids could see.

I have to admit that I was pretty disappointed with the whole place.

For a view into the world of pop culture and Americana, I guess this is a good place to go.  And for that, it was interesting enough.  But I don’t think that Coke is “happiness in a bottle.”  There was a section where people could write their favorite Coke memories.  Uh…sorry, I have no poignant reminiscences centering on consuming soda of any type.  The Coke-themed wedding highlighted on their wall?  Don’t get it.

There was a 4-D movie experience, which I thought was awful.  I hate 3-D movies to begin with, but what really set me over the edge was the simulated bug bite which was a painful poke in the back by some device embedded in the chairs.

The “production line” wasn’t moving, so you could read about what would be happening in each particular area, but didn’t actually get to see it.  The kids weren’t thrilled, especially the ones who can’t read yet.

I did like the section near the end where you could sample all the Coke products from around the world.  Unfortunately, it was packed and people kept hovering around the dispensers blocking the way for other people.  Very obnoxious. 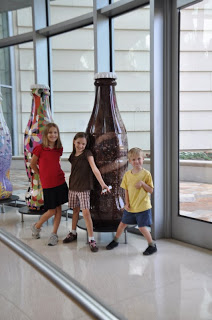 If you love Coca-Cola (and I know some people do) and you love the Coke culture, then this is the place for you.  But if you really can’t stand corporate self-promotion and the attitude that their product is a part of what makes America great/happy/wonderful, then maybe you should skip it.  Skip the 4-D movie either way.

After Coke we headed to Johnny Rockets for lunch.  We passed the 500 people standing in line for the Aquarium, high-fived ourselves for not being in with that crowd, and waited only about 15 minutes for a table (2 tables, actually) for our group of 11.

“Would it be wrong to order a salad here?” my sister asked me.

“I think that borders on mortal sin,” I replied.  “We’re planning on going to confession later, but it’s risky – you might get hit by a car before then.”

The last museum stop of the day was the Atlanta Cyclorama and Civil War Museum.  Months and months ago, my friend, Rachel, emailed me about this place, so I had it in the back of my mind.  I don’t think I would have ever selected it had she not suggested it.  She hadn’t been to it, and was wondering if I had been there.  Now, I can say yes.  And I think it was the highlight of the trip.  We loved it.  I admit, we are history geeks, and modeling geeks, and art geeks.  But I think most people would appreciate this museum.  (Oh, who am I kidding?  At least half of America would find it boring.  Not us.)

The centerpiece of the museum is the world’s largest oil painting which depicts the Battle of Atlanta.  It was made in the late 1800’s.  In the 1930’s, a diorama was added – that’s 3-D figures and landscaping.  The diorama is so well done that it is difficult to distinguish between it and the painting.  It really gives you a good idea of what it might look like to be in the middle of a battle.  Except not as smoky.  Or as terrifying.

Maybe they should make it 4-D and assault you with air pellets.

The tour guide said “No photos are allowed, but if you are related to these people and you do not take their photo, you should be shot.”  She was a great tour guide.

Also in the museum is the train that chased the Union soldiers/spies who stole a different train, tore up track, cut telegraph cables, and made a general nuisance of themselves for a day.  Disney made a movie of it: The Great Locomotive Chase.  Since it’s Disney, the historical facts are dubious, but the movie is fun.  We made the kids watch it before we went.  Apparently, Buster Keaton is also in a movie about it: The General.  We’ll have to check it out.

After the Cyclorama, we raced to Mass at The Basilica of the Sacred Heart of Jesus, which is a very pretty church.  We barely made it there in time for Mass, so it’s a good thing my sister did not have that salad at Johnny Rockets.

Part of the prayer intentions included praying for those who attended Dragon*Con and also that we would have an appreciation for our imagination as expressed in fiction (or something to that effect).  I think the pastor is a trekky.

After Mass, we took the kids out to the ball game.

One thought on “Museum Hopping”