Some people even get the day off.  Many soldiers have a 4 day weekend this weekend.

But he did take the day off.

We attended the parade in Savannah, which is, according to some source I saw online, the second largest in the nation.

Did I mention HUGE?

Three and a half hours of parade.

I actually almost wanted it to be over.  Thank goodness, I had packed drinks and snacks.

We took 238 pictures today, Bill and I.  I will only share half of them.

Notice the kids swarming McGruff?  It’s quite common for the audience to run into the parade and interact with the marchers.  Savannah has a very small-town feel.  One woman a few seats down from us seemed to know everybody who was anybody in the parade.  She was up more than she was down.

Besides just saying hi to your friends, the audience, especially the female members, run into the parade and hang beads around the necks of marchers.  And they kiss them.  And they leave evidence behind.

Unfortunately, I forgot my lipstick.  Maybe if I’m here next year…

I did run out once.  More on that later.

Of course, no Irish themed parade would be complete without bagpipes. 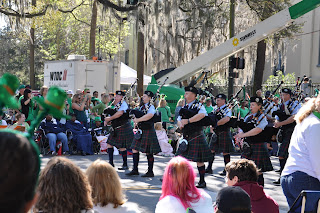 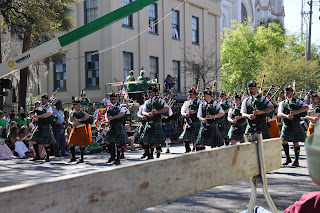 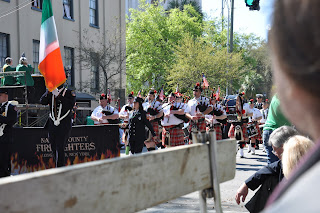 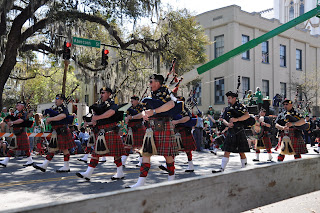 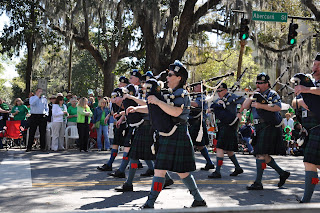 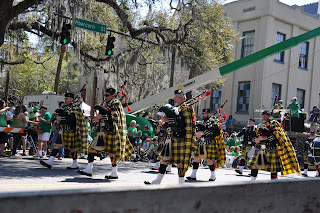 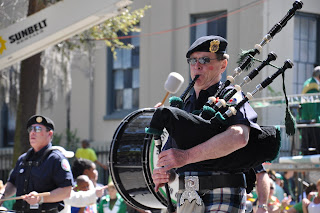 I know this post is long, but still a few more (dozen) pictures.

The military got many cheers and usually people stood up when they (and veterans) went past.  Some generous but misguided people kept trying to give beers to the soldiers.

While many of the marines were plastered with kisses, none of them were wearing the beads.  If someone gave them beads, they thanked them and put them in their pockets.  ONE marine had beads on, but he was the boss, so he could get away with it.  (Side note: Bill noticed an error with his uniform.  I’ll bet the guy was mortified when he discovered it.) 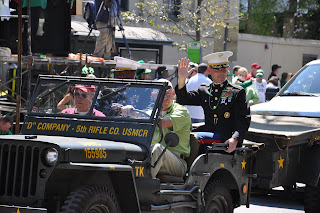 The bars in the area opened at 7 am.  For those marching, it was best to BYOB.

I’m not a big movie personality person, but this guy really looks famous. 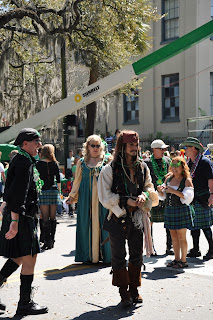 He was just marching along, toward the end.  No big sign saying, “Hey, look at me!  I’m Johnny Depp.” 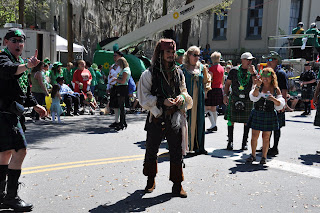 He was standing right in front of me…maybe 10 feet away and nobody in between.  If it wasn’t him, then they found a darn good impersonator.

Lastly, Fritz and Billy did not get to see the parade.  They marched with the Scouts.  I tried to convince Katie and Jenny to run out to them, but they wouldn’t go and kiss them.

So Mary and I did.

When the boys found out at drop off that girls KISS the marchers, they were terrified.  Billy stood in the middle of a bunch of tall boys so you couldn’t even see him.  I had to hunt really hard.  When he heard me say, “Kiss him!” he ducked, until he saw it was Mary.
Fritz was easier to spot.  And somebody else found him later on. 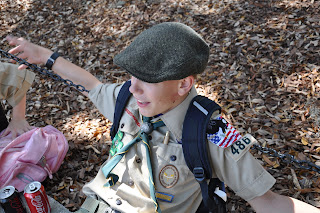