Our Saturday was so busy, I needed 2 posts to talk about it.

Way back when I was in college, I dated this guy on the fencing team.  I think he was one of the captains.  When the team manager graduated, I volunteered to take her place, mainly because I could then spend more time with this guy.  I know, pathetic.  I hope my daughters have more dignity when they are older.

One of my duties was to occasionally drive one of the 15 passenger vans filled with the team and equipment to the away matches.  Little did I know that my adventures navigating the narrow streets of Newark, New Jersey, in a large van were a foreshadowing of my future life.

Yesterday, after the parade, I loaded Team Reitemeyer up in my 12 passenger van and headed into Savannah to watch my husband fence his first real competition since 1992.  When I arrived, one of the first things he pointed out to me were the girlfriends there watching their boyfriends fence.  Bill wanted to go up to the couples, point to our six kids, and say, “This is your future.”  {The one redeeming thing about fencing-team-groupie days was that I did end up marrying that boyfriend.}

My batteries were dying, so I turned off the camera.  Bill placed second in his pool with 3 wins and 1 loss.  He went on to the direct elimination round.  Won his first bout, but lost his second.  The guy he lost to ended up winning the whole competition, so it was a respectable loss.

I’m glad I saved my battery power.  Bill placed 6th overall.  The top 3 guys were all young, college-aged.  The 4th, 5th and 6th placers were more than double their age.  The guy in 5th had left already.  He had to be 10 years older than Bill. 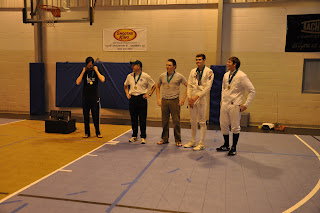 I had a great time.  The younger kids, not so much.  Next time, I’ll leave them home.