“How about I put it in one cup and you share it,” I suggested.
“But Katie doesn’t like whipped cream and Peter and I do,” whined Jenny. She had a point, but I feared that they would be disappointed if they saw their portion in our usual mugs. I think, perhaps, more eggnog would remain clinging to the sides of the mug than would actually make it into their bellies.
So, I gave them virgin eggnog shooters instead. 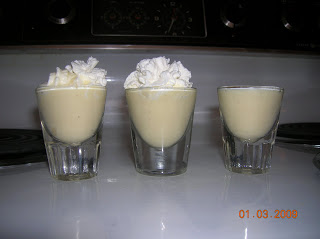 The things you do for love.

6 thoughts on “Thank goodness, the eggnog is gone”