Way back in September, I signed up for my turn at bringing snacks to the Little Flowers and Blue Knights meetings held at the same time same place. My turn was last Thursday. Normally this would entail loading the grocery cart with an appropriate number of juice boxes and pre-packaged snacks from a section of the store I rarely visit. However, since December’s family potluck banquet was canceled on account of snow, the leader decided to do an abbreviated celebration at this, our first meeting since then. She was going to buy cupcakes, but since I had volunteered for snack, I said that I would take care of it.

How many kids were there? I asked.

Thirty, she groaned, plus siblings.

Thank goodness I forgot to buy cupcake papers when I bought the four boxes of cake mix and four containers of icing. Cupcakes were out, 9 x 13 cakes were in. I made two, and realized it wouldn’t be enough. I made a third cake using a bundt pan. Deciding I still needed another one, just in case, I removed one of the 9 x 13 cakes from its pan and made a fourth cake.

Cakes baked, I now needed to frost them. I could have just put the store-bought icing on them and been done, but I wanted the cakes to be pretty. I have not had much practice in making cakes look pretty. “Decorating” a cake around here means adding sprinkles. But I figured, armed with this fancy pastry bag, I would give it a shot.

I learned a lot.

First of all, using a template is a good idea. If you can’t draw a straight line, it’s likely that frosting in a straight line will not come naturally either. 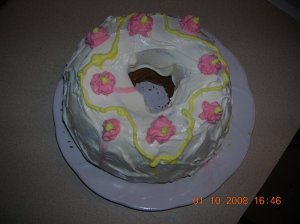 Next, that pastry bag is great, most especially because it cleans up much more easily than a plastic pastry bag. But it is essential that you thoroughly dry the thing in between color changes. Failure to do so will result in unsightly drips.

Next, simple is good. If you have unused frosting, do not feel obliged to use it all up on your cakes. Just eat it. Or give it to the kids. Trying to make decorative squiggles just might ruin the whole look.

{I call this the Cockroach Cake.}

And finally, when all your work is done, keep your dog out of the kitchen. And if you forget to do this, and she gets a big lick on one big corner of one cake, do not think that chastising her will keep her from doing it again and ruining a second cake.

In the end, my neighbor drove the kids over because my car battery was dead. After a AAA jump, I took Pete and Mary, two whole cakes, 3/4 of a 9 x 13 cake, and 1/2 of a bundt cake to an appreciative group. I think three cakes would have been enough for 50 to 60 kids and adults. And one dog.

8 thoughts on “Cake Decorating for the Artistically Challenged”