I knew my running partner was just about runned out.  I just didn’t think things would end so abruptly. 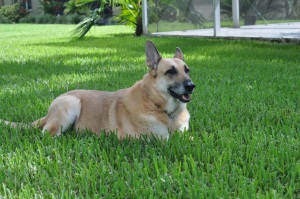 We got Greta from a rescue nearly 8 years ago when she was about a year old.  We started running together right away.  It was hard work.  She was usually good at staying to my left, and she wasn’t prone to sudden stops or chasing squirrels.  Well, maybe squirrels, but I got good at seeing them first and telling her no.  She obeyed.  But the dog had unlimited energy back then.  She wanted to lead me along, and I had to constantly fight her to keep her somewhat in the “heel” position.

Back then, I was setting my alarm for 4 am.  She quickly learned that the alarm meant it was time for me to get up, get dressed, and take her out.  I had to be back by 5ish so Bill could go to work, and she made sure that I didn’t hit the snooze button.  It didn’t matter how hot or cold, rain or fair, when that alarm went off, she would dance and jump and beg and whine at me until I got out of bed. 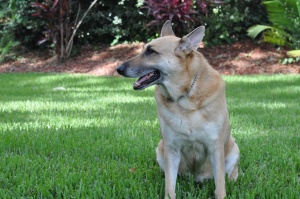 We had her in a dog obedience class recommended/required by the rescue.  It was Saturday morning, which also happened to be the day I had time to do a longer run.  One day we did 6 miles, and then she went in the backyard and chased balls that Bill threw for her.  He took her to class and was reprimanded for her energy.  “You need to take her for a long walk before class,” the stern instructor told him.  We bought a doggy backpack and added weight, which did seem to help.

Even when that phase of our life changed to a slower pace in Kansas, with a more reasonable wake up call, and then a new baby, and less regular walks instead of runs, she knew which clothes were for outside-exercise and which were not.  Her ears would perk up if I put on pants with an elastic waist.  She would sit up if I put on a dry-wick shirt.  And (oh my YES!!!) she would jump in circles if she saw me grab my running sneakers.  I taught her to run on a treadmill, so she could burn some energy when I didn’t have any to spare.

It was while we lived in Georgia that I realized she was starting to slow down.  She didn’t jump up when the alarm went off, and once, after I had gotten all dressed and was ready to go, I had to order her to come with me.  She was more interested in sleeping that morning, I guess.

Then George was born, and we moved even further south with an even longer hot season, and she did not seem to mind at all the slower pace and infrequent runs.  About a year ago, I started getting out on a more regular basis.  She still loved to come, but she was no longer pulling me.  One day I did 100 yard dashes, walked back and dashed again.  Ten times.  By the fifth, I was dragging her, and by the 8th, I let go of the leash and beat her handily.  She didn’t mind.

In November, she hurt her foot.  I made her rest for a few weeks, and she whined when I left.  I felt bad, but my running times were actually better without her.  After the new year, I committed to a running program that had low mileage – nothing more than 3 miles.  In part, I didn’t have the time.  In part, I knew she couldn’t handle more than that.

Two and a half weeks ago, we were on a 2 mile run.  There had been storms the night before and the sidewalks were covered with debris.  I easily dodged a few branches and Spanish moss, but Greta did not.  She was behind me, and I heard her yelp.  We limped home, she on just 3 legs.  I wouldn’t have taken her to the vet at that point, but I needed to kennel her for a few days, and the kennel wanted a bordetella vaccine, which she didn’t have.  The vet wanted to do an x-ray, and it showed she had a fracture.  The splint lasted less than a week; she broke it by continuing to use her leg.  Jumping, chasing balls.  We have had to keep her locked in her crate so she won’t play.

I wonder if she hadn’t actually broken it back in November, and it hadn’t properly healed.  Even if this was a completely different injury, I just don’t see that she’ll be able to continue running without significant risk of breaking it again.  I hope in a few weeks to take her out for a slow walk a few times a week, and see how she does.

In the meantime, I have two new running partners: Fritz and Billy.  This is our second week, and Fritz has outpaced me from Day 1.  Billy can beat me if he runs (motivation issues, and sometimes he just walks).  I am so happy we started with low mileage (under 2 miles), because **I** need the extra weeks to get used to the runs.  I had been doing 3 miles, no problem, just slow (32 minutes).  Now, these boys have me running, consistently, a mile in under 9 1/2 minutes.  Yesterday, I did it in 9:11, which is a full minute faster than with the dog.  Even if we don’t all go out at the same time, we log our times when we come home and compare them.  It will be a lot of fun in July when my husband is here to challenge us all.

But the dog.  It’s easy to go without her now, knowing she needs to rest.  It will be hard to tell her no in a month.  And I will really miss her companionship, especially once it gets dark again in the mornings.

4 thoughts on “No Spring Pup”