Bill is on leave this week, so we’re not going to get much school done.  We started off his vacation by taking a road trip to Georgia, for 24 hours.

First stop was visiting friends who just had their ninth baby.  Another local friend called while I was there and said that it sounded chaotic.  “I’m in a house with sixteen children,” I said.  Sixteen children who were very happy to see each other…and very sad to leave.  We took a group photo of the kids, minus the newborn and the uncooperative 1 year old.  And then I realized Mary was missing, apparently not getting the memo that we were taking a group photo, so we had to do it again.

Then we went to our favorite place in Richmond Hill, Georgia: The Ice Cream Stop.  The ice cream is great; the owners are the best.

I’m not happy that this photo of Mr. Bill and Ms. Gayle is blurry, so I will have to go back and get another one.  This other one is typical Ice Cream Stop: Mr. Bill sitting behind his counter, checking out the weather, talking about how the temperatures affect his business, while Ms. Gayle is busy doing something.

Although George has had ice cream, he got to have his first ever ice cream cone. 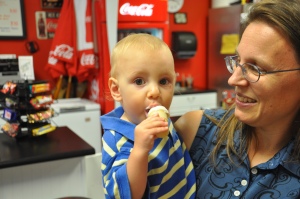 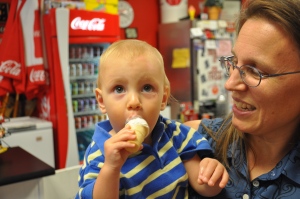 After he was finished, he had a few minor meltdowns as he kept pointing to the ice cream demanding more.  Fortunately, Mr. Bill has toys and other distractions.  We were there for two hours, meeting up with several other friends.

Then, after checking into our motel, we went to our second favorite place in Richmond Hill: Molly MacPherson’s.  You can not believe our disappointment to find they were closed for a private party.  How dare they?  I mean, we drove 5 hours just to eat dinner there!

We went somewhere else, not worthy of mention.  Not Molly’s.  We met two other families, one of which had just had their first baby.  It was nice.  Not as nice as Molly’s.

Not sure if we’ll get over this.

The next morning, we went to Mass at St. Anne’s, where George was baptized, and saw the pastor.  I put George in the nursery, where he cried “most of the time.”  Poor baby.

First we went to the beautiful Mission Nombre de Dios near where the Spanish first landed on North America and had Mass.

The statue is of Father Lopez, who said the first Mass, and the cross in the background commemorates the 400th anniversary of the landing in that approximate spot. 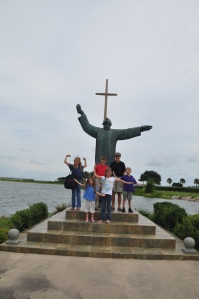 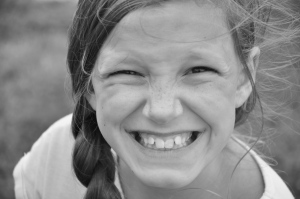 This is the only picture of me.  Nice, huh? 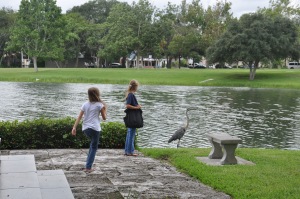 And then there was this snake sticking up from the bushes.  We walked away, and he stayed there.  Curious.

The Mission includes a shrine to Our Lady of La Leche (and a happy delivery).  Several women I know had been sharing stories of conceiving after visiting this shrine.  I realized later that I, too, conceived George right after my sister and I visited this shrine.  I had intended to avoid this shrine, but there I was anyway.

After this, we walked down the road and past the Ripley Museum.  Outside the museum is a full-scale replica of the statue of David.  When it was first displayed, the nudity scandalized prudish Americans, so they covered him up until hedges could be built around him.  There is an opening in the hedges for the daring.  I can laugh about how silly Americans are, but my girls went in two steps ahead of me to see him.  The first thing I saw was them, with their hands up as one might look at something in the sky with one’s hand raised to block the sun, only they were blocking out body parts.

Instead, they decided to look at how big his feet were. 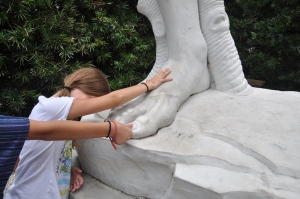 We did not go into the Ripley Museum.  Instead, we continued down the road to the fort.  I’ve been to St. Augustine three times, and each time, the fort has been free admission for the day.  I think it’s always free, they just pretend that it’s a special to make you feel good.

I’ve seen plenty of forts, and I don’t find them particularly interesting, but this one is in great condition and does have some great displays talking about the history of the area.  I guess it’s my favorite fort, so far.

Notice the storm coming in 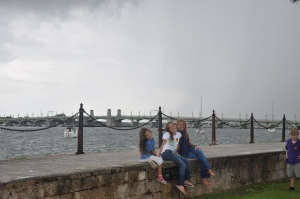 From the fort, we went across the street to the living history museum.  We got soaked on the way over, and had to seek shelter multiple times while at the outdoor museum.  We didn’t take any pictures.  We did have a good time.

I had wanted to go to the beach today, but we are exhausted!  Maybe later this week.

One thought on “Georgia Road Trip”