When George was four days old, we had him baptized.  Since we moved the next day, it was extremely low-key.  My parents and my in-laws made the trek to attend, even though we could offer them very little hospitality.

Most of these pictures were taken by Fritz.  When you have a 14 yo boy as official photographer…well, perhaps some boys that age have a better eye for these things.  These photos were the best he took.  The rest were blurry…which is quite an accomplishment for my high-tech, no-fail camera.

George’s baptism was, of all my children’s baptisms, the nicest one.  Our church, although growing rapidly, is still pretty small (about 1000 families) compared to other parishes we’ve attended.  We’d been there a “long” time –  over two years is a long time for us!  The pastor knew the whole family, even the children’s names, knew the Godparents, who have been members of his congregation for much longer than we had been, and even had met both sets of grandparents before.  Peter and Mary were baptized in military chapels – a transient community – and my four older children were all baptized at our church in New Jersey where we lived for 6 or 7 years…but it was a huge parish, and our children were all very young when we moved away.  The priests and deacons who did the baptizing knew us, but didn’t know us, if you know what I mean.

Billy reads a passage from the Bible: 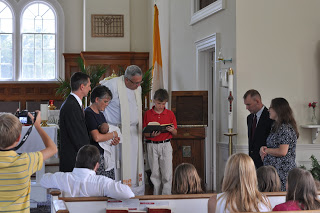 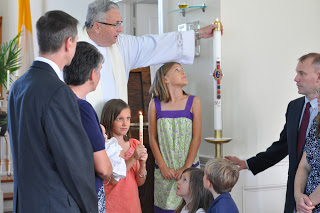 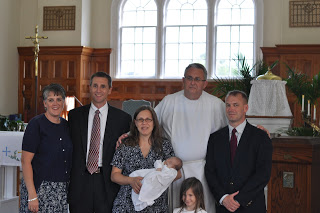 The best photo taken.  Crisp, in focus, nicely centered, everybody looking at the camera…I wonder if perhaps my husband had taken over camera duties for this shot…

Fritz did not take this picture, obviously.  He insisted on standing on the step so don’t think he really towers over us yet.  He is just a hair taller than I am now.  He likes to think he stands at 6 feet, but not yet.