Oh, how I wish that my students applied themselves to the subjects I teach- like spelling – as much as they do to their extracurricular drawing.

Fritz and I are reading George Washington’s World, and loving it. Billy is listening in and began copying the drawings found inside it, and then Fritz started doing it too. Had I actually assigned either one of them the task of drawing these historical people, they would have balked, of that you can be sure. 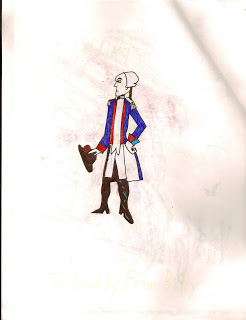 My kids hate crayons, and markers are too messy. For years I’ve been having them use colored pencils, and they’ve liked that okay. Recently, I bought a bunch of colored gel pens, and they really enjoy this medium. Colored pencils are cheaper, but the pens get better results.

Last year, we read a book on Daniel Boone. The boys pulled from that two important pieces of knowledge about Daniel: he got his own gun when he was twelve (they are counting the days), and he never really learned to read or write. I’ve tried to explain that there isn’t much of a living to be made in hunting and trapping nowadays, but that seems less important than the idea that you can be illiterate and famous.

You’ll notice Billy draws for his father and Fritz draws for me. I don’t know why that is. I do know that our first week of school, I had very seriously considered sending Fritz to our church’s school. Then I saw the $4000 price tag and came to my senses. Actually, I realized that sending him off to another teacher would only shift the homework struggles to the afternoon and evening hours; it wouldn’t actually make him a better student. Perhaps these “love notes” are his way of apologizing for all the wrinkles he’s causing his momma.

Despite the 4 day week, we should be getting all our work done today. I staggered my students’ school year starts. Katie and Jenny are finishing week 1; Billy is finishing week 2; and Fritz began his school year three weeks ago.
I do not recommend this.
The one who is supposed to be working is resentful that the others are not. The ones who are not working are upset that they don’t “get” to do school. My friend, Rachel, had a better idea of staggering subjects: first, Latin; then, math; etc. Next year, perhaps, I’ll try this.
Another great idea from Rachel was having blocks of time (yes, others recommend this too, but Rachel was right there with the suggestion when I needed it). I had put together a progression schedule, which was the order I wanted my students to tackle their subjects. If everybody progressed at a reasonable pace, I would be able to work with my kindergartener while my older students did independent work. Well, my older students don’t like to work at a reasonable pace, especially when it comes to math. I would send Fritz off to do math, and, an hour later, he would be a quarter way through.
Week 1 with Fritz was a difficult week.
Week 2, we began using half hour blocks of time. Although I may go over by a few minutes if they are almost done with an assignment, I try to move on at the end of the half hour to other things. I have 3 half hour segments for math for Fritz, including one segment which is about 15-20 minutes of speed drill, mental work, and lesson (Saxon math). He is much improved and mostly getting his work done within that time frame.
I also start Fritz early – no later than 8 am and by 730 if I can. This is hard on the other kids (Jenny and Katie) who want to begin too. But the girls are improving in their patience, and I think may grow to enjoy the 10 – 15 minute blocks of free time they get because their lessons only take a fraction of the time of their brothers.
Last week, I used a hand-made chart to assign subjects for each student to the different blocks of time. It was a work in progress. After I added in the girls this week and saw how things meshed, my biggest problem was trying to see, at a glance, what we were supposed to be doing at a given time. Thrifty mom that I am (and lazy, too, not wanting to drag 6 kids to the store), I took some old pocket folders and cut them up into an index card size. 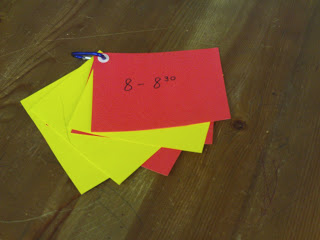 Notice the drawing on the front of the card? These cards will change as we work everything out, so using pristine cards or paper didn’t really make sense.

I made one card for each half hour block from 8 am until noon. On one side it has the time, and on the other, it has the time and each student’s assigned subject for that block of time. I punched a hole in the corner (and reinforced it), and connected them all with a caribiner clip we happened to have. (Pictures are blurry because my good camera is in Bulgaria with Bill). I like flipping the card to the appropriate time block and seeing what subjects we need to be tackling. Each student has a weekly checklist with the actual assignments.

So as we conclude these first, second and third weeks of school, I’m optimistic that it will be a good year. Having four students, especially when the older ones are unwilling to work independently, is challenging. But Fritz is starting to see that having the bulk of his work done before lunchtime is possible, and having the bulk of the afternoon free is wonderful, so his motivation is improving. I’m going to try to do one more complete week (next week), and then Bill should have a week off. Taking breaks when we want to is such a lovely advantage to homeschooling.

10 thoughts on “School in session”