The baby had three shots Monday afternoon. “Fussy” is a vast understatement in describing her mood Monday night through this morning. “It’s no wonder you have tendonitis,” said Bill as he played the role of baby-crib so I could get dinner on the table yesterday. Yes. 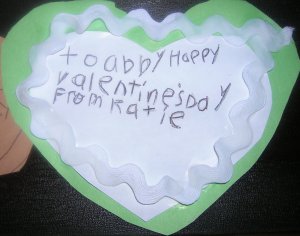 Before I had even had my coffee this morning, the girls were hard at work making Valentine’s Day cards. Bill and his school chums have a fine motto: Embrace the suck. (Sorry, men in the military are not well known for polite language.) That’s what I did today. I embraced. I did crafts. All.day.long.
I will not have another craft day for at least a year.
Here’s the scene of destruction. Note the math book on the floor. I managed to squeeze in a few lessons. 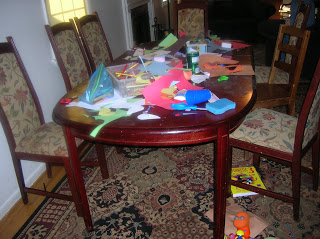 The piano was used for finished pieces needing to dry. Poor beat up piano. 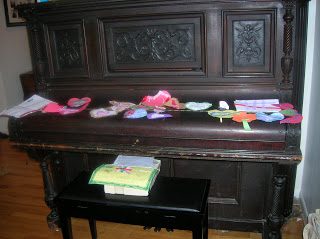 As I was making dinner, Bill asked if the kids were supposed to be clearing the table. “Honey, even I don’t know where to start in there.” It was overwhelming. If I liked arts and crafts I would get organized, but since I don’t like messes, I don’t like arts and crafts, so I don’t get organized, so the messes are bigger, so I hate arts and crafts more…
I’m saving it all for when I’m a grandma. Yeah, that’s the ticket.
I thought I heard Katie telling Fritz something about no school tomorrow, and sure enough, he asked me before he went to bed if we were having it. I had to disappoint him. Despite Katie’s idea that Valentine’s Day is a big deal, I see no reason to take the day off. The poor martyred priest. Little did he know he’d end up the patron saint of greeting cards.