After Mass last Sunday, a parishioner asked my kids if they had been sledding. They assured him they had. Had they been on Suicide Hill? he asked. No, just the hills in our neighborhood.

My kids wanted to know where Suicide Hill was. It’s near The Prison, but there is more than one around here, and we passed The Other One on Tuesday morning. They wanted to know if the hills over there were Suicide Hill. I explained it was the wrong prison and then asked if they knew what suicide meant. Really fast? guessed Fritz. I defined suicide and explained how that applied to a sledding hill. I then got to hear the boys evaluate every hill we passed for its suicide factor.
Katie didn’t quite get the vocabulary lesson, and later was talking about sledding on Shoe Size Hill. Is that narrow or medium width?
The last few days have brought warmer temps. The kids asked to go sledding yesterday, and I warned them they might not be able to do so. They persisted and were off. Jenny was the first to return, crying, covered from head to toe in mud. I got a towel on the floor before she came in, but then, like a wet dog, she shook her hands and wet mud splattered all over the walls and floor. No photos, just damage control. 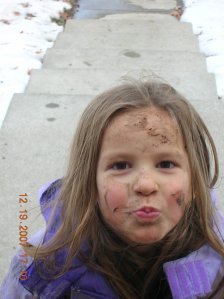 Katie came home next, but Bill was ready for her.
And the boys, being boys, had to be ordered home.

4 thoughts on “Adventures in Sledding”