Interesting. I’ve been following threads of information about the wearing of headcoverings (or not) for women in church for some time now. For my generation, headcoverings were never the norm, except possibly for old women who dressed oddly (to a young person’s eyes) anyway. But more and more I’m seeing literature that basically says it is immoral for women to go uncovered in church. I’m not one to appreciate being accused of immoral behavior, and I feel compelled to investigate further. That article does nothing to clear the waters. Are headcoverings simply a matter of fashion/custom? Or was this “change” just another bad reform of the 60s?

Personally, I’m wondering how old I have to be before I can wear a babushka. Bill seems to think I have to wait until he’s dead. 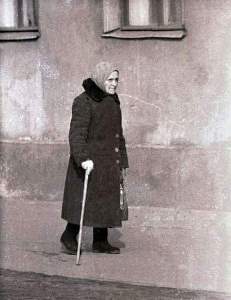 Updated to add this photo of a babushka. That’s the look I’m going for when I’m older. Classic style is never out of fashion.

Updated again to explain where I’m going with this. There was a time when Catholics, generally, would never use birth control. Although Church teaching has never wavered regarding its immorality, many Catholics today don’t think twice about using it.

If I were to attend a church where the custom was to wear a headcovering, I would have no problem wearing one. I’m just having difficulty figuring out if this is truly a local custom (when in Rome) thing, or if, like birth control, its use (or not) has been dictated by secular forces rather than theological ones.

Updated, once again to include the link to canon lawyer Edward J. Peters’ posting about this issue. Thank you, Denise, for bringing that to my attention.

I think I’ve come full circle on this. When attending certain churches, particularly outdoor Masses in vacation areas, the clothing is often very casual, even khaki shorts are “dressy,” and I tend to dress similarly. When attending other churches and most people wear their Sunday best every Sunday, I make an attempt to follow suit. In other words, I don’t have certain clothes that I wear on Sunday no matter what anyone else is doing, although I really would have difficulty wearing shorts to church unless it were a Mass at a camp or other truly rustic locale.

My current parish has very few women wearing headcoverings of any kind. Those who do are generally wearing flamboyant red hats. If every woman in the church wore a flamboyant red hat, I might be persuaded to wear a hat. But it wouldn’t be red. And it wouldn’t be flamboyant. If every woman in the church were wearing a black mantilla, I might wear a black mantilla. Or I might wear the very pretty blue Afghani headscarf Bill bought me instead. But I would cover my head.

I wholeheartedly agree with the premise of modesty and submission which seems to be tied to the custom. But if it is not an obligation to wear one, then I don’t feel the need to stand apart from other women in a church and make that public statement.